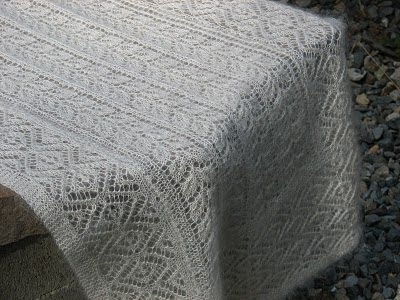 I don't do Resolutions.

You new there was a "but" coming, right? How could there not be? Last week I was digging around in my storage area (aka the space behind the sofa) and found myself pulling out UFO* after UFO, all carefully sealed up in individual ziplocks (suck on that, evil moth population!). And they just kept coming. I was sort of tossing them over my shoulder onto my ottoman. When I finally found the thing I was looking for, I turned around and was faced with

Holy shit, there must be 40 UFOs in the pile. And that is so not all of them.

I decided to face that reality every day, starting immediately. I slid each and every one of those suckers (mostly - I've stopped looking behind the couch for the time being) into my bookshelf (right next to the tv, no avoiding them). So maybe I'd feel inspired to actually work on them. No pressure, but hey, with 50 WIPS** staring me right in the face every day, at least one of them's got to be moving enough to me that I'll pick it up, right?

So far I have finished three pairs of malingering socks, written down 4 patterns, woven in ends on two scarves. And started on new thing. Which I feel I've earned, what with all the new socks in my drawer. Photos forthcoming, as soon as I can nail down someone who doesn't suck at it as much as I do.

I'm kinda excited about all this. Ideas are flowing like hot fudge, man. And I love hot fudge.

Goodbye. You've been a real bastard and I will not be looking back. Don't let the door hit you and all that. There will be no booty calling, no drunk dialing, and no rose-colored reminiscing. 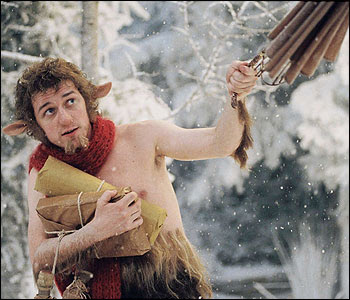 As we are still being bombarded with endless snow and snow warnings and more snow predicted and there is a freaking FOOT of snow in my backyard, I begin to wonder. Always Winter, never Christmas?

If I could find the damned White Witch, I'd kick that biotch's ass RIGHT NOW, I tell you.

Stoopid Nature, stoopid sparkly pretty snow, covering the city with beautifulness and holiday charm, making it look all clean and pretty. Meanwhile, getting all up in mah grill, messin' wit mah plans.

I am supposed to be whisked away on a romantic getaway RIGHT NOW. Drinking wine and gazing at the ocean right outside my oceanside cabin window, lolling around in my nightie.

Instead, here I sit. And my friend sits, across town, snowed in in his own house.

PLUS! The special secret surprise I worked out for my daughter sits on the other side of Lake Washington, and I can't get to it. What if I can't get to it before Christmas Eve?! It's a really really great surprise, and really, the main event of the holiday. I am so screwed.

On the upside, my house is cleaner than it's been , probably since I moved in.

Grrrrrrr.
Posted by kristin at 8:55 AM 3 comments:

In Today's Episode of Karmic Retribution,

I totally wiped out on the way to teach my knitting classes.

On the city sidewalk. I tripped over the sidewalk, people. Dig it. I blame the trees. The trees and Phyllis.

The trees had grown roots, the roots pushed up the edge of the sidewalk, and Phyllis drive by. Gazing at her and wondering whether I could flag her down and bum a ride, I hit the edge of the sidewalk with my toe, and I bit the dust. Since I had already called in late, I was hurrying and therefore hit the pavement with both hands and both knees, full force. Well, my right knee took quite a bit more of the full force than the rest, but you get it.

My immediate concern, of course, was to not look like a fool in front of the many (MANY!) passersby, so I leapt up instantly and pretended to be fine. Which was kind of hard to do, what with the spurting blood and inability to walk.

That's what I get for laughing whenever someone falls down.

So I hobbled to the nearest restaurant, 20 feet away, which was closed. As was the next one, and the hair salon. Stupid pretend-Village-in the-middle-of-the-big-City and its stupid quaint closed-on-Mondays affection.

But the bar! The blessed bar was open.I hobbled in trying to hold my skirt out away from my legs so as to not smear the blood further (read:impossible), yet not up high enough for anyone to be able to see my doughy, unshaven, bloody legs (read: pipe dream). Ah, the dignity.

Y'all, I wished I had a camera so bad. Not just to record the gore, either. I don't know if there are words to describe the filthy, horrifying "First Aid Kit" that came out of the back of that bar. Seriously? When I dug around and pulled out the neosporin? Some kind of brown mystery liquid DRIPPED OFF IT AND LANDED IN MY WOUND.

I may die. I wiped everything I could get my hands on down with sterile wipes, called in sick to class, and ordered a drink.
Posted by kristin at 8:38 AM 4 comments:

I moved to Madison, Wisconsin, in January of 1998. Two weeks before the Packers won the Superbowl. Which is not germane to this post.

While I was there I did a workshop called The Artist's Way, based on the book by Julia Cameron, bless her all to pieces. Anyway during this time I got into the habit of coming with every day with 5 things I am grateful for.

the thingamajig that turns off my coffeemaker when I forget about it and leave the house, which is every day. I also have that function on my iron, curling iron, and flatiron, none of which I ever use. Still, they all make me feel slightly more assured that when I get home from work, home will still be there.

flush toilets. (I mark this one nearly every time. Imagine a world without flush toilets! Gross!)

my parents, who are there for me all the time, and in ways I probably don't even realize. They are watching my daughter for me today so I can work. Gawd I love my parents.

stick-on back pain relief pads. I keep them in my wallet, the console of my car, my cubby at work, and in my backpack. The salonpas ones are the best, and the least expensive. Such a rare combo.

Random, I know. I could go on and on today, I'm feeling pretty grateful. I find that when I do this I feel more content all around.
Posted by kristin at 4:55 PM 3 comments: 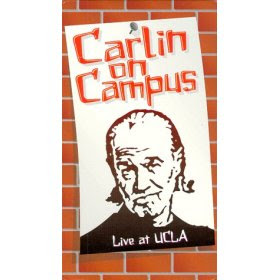 I'm sitting here, at 11:47 on a Sunday night, having a drink. The death of George Carlin is so very sad to me. He was 71, yeah, but man, he was always there. He's been in my world for my whole life. I learned a lot of swear words from George, back in the days when I had to sneak back downstairs after my mom went to sleep, and watch Showtime with the sound turned way down low.

I've called a few friends, but no one is up this late, and so here I sit, honoring George by myself with a Mike's hard lime, watching him on Youtube. (Seriously? May Joe Pesci bless YouTube, for more reasons than just this. But I'll get to those later. Or maybe I won't. Who am I kidding? I'm barely a blogger.)

George Carlin still seemed so young to me, even as I was saying, "Damn, he looks so old..." He's only three years older than my mom. When did we all get so old?

On a lighter note, tomorrow I'll be participating in Monday Crafternoon, where I intend to create a loverly pair of Max-from-Where-the-Wild-Things-Are shrinky dink earrings. I am slightly obsessed lately with shrinky dinks. I made a Harold-from Harold-and-the Purple-Crayon necklace and a Wolverine (X-men! Duh!) Pendant.

But I wonder if I can't draw or google up a drawing of George Carlin. Hm.

But don't hold your breath.

Is how I want to celebrate my birthday! My favorite blogger, who shares my birthday, AND Franklin?! Holy God. That would be so cool. Maybe I could ship my self UPS to Toronto. I bet I can fit into one of those big dog carriers.
Posted by kristin at 12:24 PM No comments: 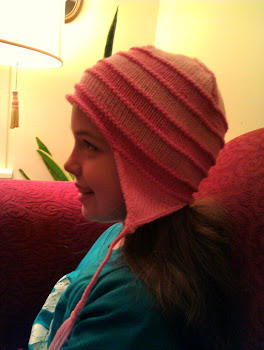